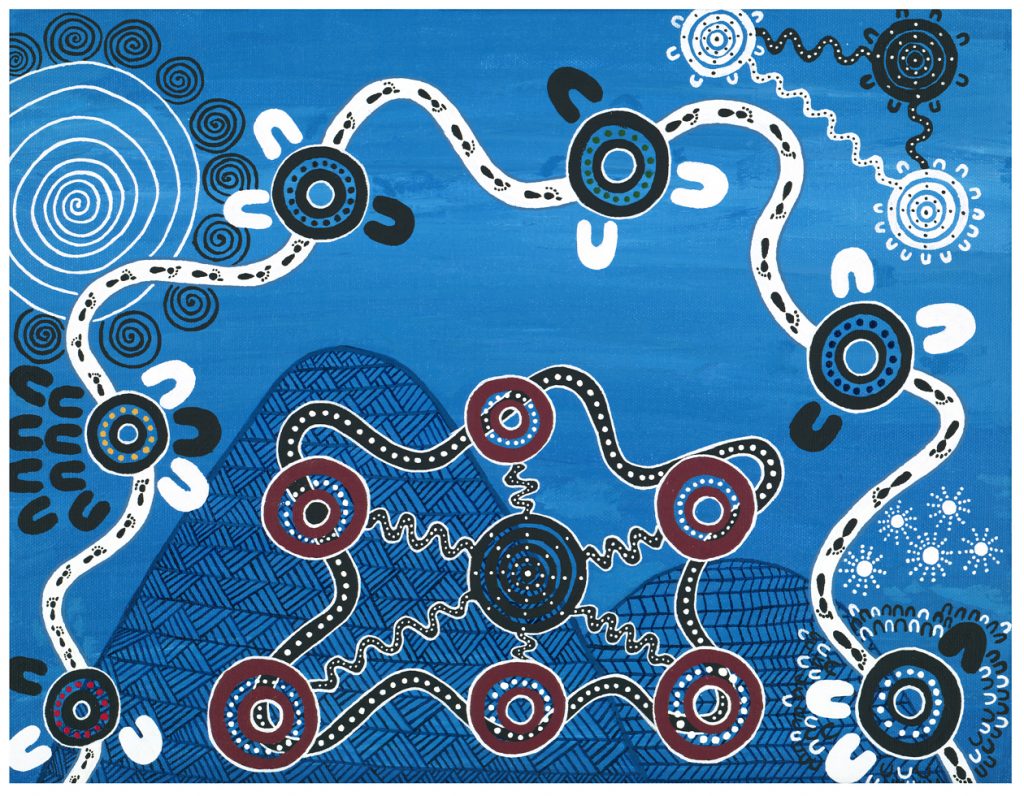 The pathway is representative of the journey that North Coast Aboriginal Corporation for Community Health (NCACCH) has taken from conception to the present day.

The footsteps along this pathway begin small, like an infant and as the service grows and matures into adulthood, the footsteps become larger.

The six circles along the pathway represent the evolving service of NCACCH between 1999 and 2010.

Circle One – The two white, and one black ‘U’ represent Sunshine Coast Hospital and Health Service (SCHHS), the Sunshine Coast Division of General Practice (SCDGP) and NCACCH. The circle represents NCACCH as a service.

Circle Two – Depicts NCACCH, SCHHS and SCDGP around the table with the NCACCH Board members. At this point in time NCACCH was directed by the government to develop a specific model of health service delivery other than the “stand alone” model of a traditional Aboriginal Medical Service (AMS).

Circle Three – NCACCH developed the Brokerage Model with the contracting of dentists, podiatrists, counsellors and other allied health providers in the region. SCHHS and SCDGP meet regularly with NCACCH to discuss how they can help with the development of additional health services to Aboriginal & Torres Strait Islander people.

Circle Four – NCACCH, SCHHS and SCDGP now have a memorandum of understanding and continue to meet to discuss the NCACCH Brokerage Model. Services have now been established for clients to access doctors at no cost.

Circle Five – NCACCH is now very strong and is being recognised as a model of healthcare that can be successfully replicated within similar locations for Aboriginal & Torres Strait Islander communities.

Symbol One – The large white spiral in top left corner represents our funding body the Australian Government Department of Health – Office of Aboriginal and Torres Strait Islander Health (OATSIH). This is the funding body for all Aboriginal Medical Services throughout Australia. The spiral shape represents the opportunity for NCACCH to be revitalised as a health service provider. The small black spirals surrounding this represent the other Aboriginal Medical Services throughout the nation that are funded by OATSIH.

Symbol Two – In the top right hand corner one black circle representing NCACCH and two white circles depicting SCHHS and SCDGP, highlight the strength of the existing partnership. The small U’s surrounding the circles represents the board members and administration of these organisations.

Symbol Three – The five white stars in the bottom right hand corner symbolise the awards that NCACCH has received for being a quality healthcare provider as well a responsible and transparent governing organisation.

Centre background – The two mountains represent the Kabi Kabi Country, to which NCACCH provides health services. The story of the Glasshouse Mountains is one of family, respect and lore.

The black pathway linking these red circles represents the ease in which the community is able to move between the different areas and still have access to health services. The black circle in the centre represents NCACCH as the hub which links all these locations through the six referral pathways.